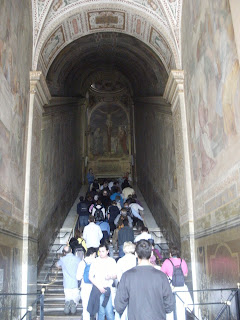 Did you know that there are over 900 churches in Rome?  Of course, not all of those are Roman Catholic, still...that's a TON of churches for just one city that's less than 500 square miles.  By comparison, Jacksonville, Florida has just 52 Roman Catholic parishes and is the largest city (land area) in the Continental U.S.  I mention this because I was in Rome for 6 days and was only able to visit 4 churches...including St. Peter's Basilica.

Eventually, I will get around to sharing all 4 of them with you, but today I wanted tell you about the Holy Staircase.

Across the piazza from the Basilica of St. John Lateran (this is the Pope's church as Bishop of Rome), there is a place called the Holy Staircase.

"The Holy Staircase is said to be stained with Christ's blood, as it is popularly identified,
at least since the mid-1400's, with the marble steps that Jesus climbed and descended
twice on the day of His Passion, on the way to trial before Pontius Pilate in the
Praetorium.  St. Helena, Constantine's mother, is said to have brought the Scala Pilati
from Jerusalem to Rome as a gift for Pope St. Sylvester I (311-314), who installed it
opposite the old Patriarchate.  The devout climb the 28 marble steps (faced with 18th
century walnut planks) on their knees.  The old Chapel of the Popes is at the top of
the staircase, concealed behind a heavy grille.  This is Rome's most venerated site,
called the Sancta Sanctorum because Pope Leo III (795-816) stored countless precious
relics under the altar, in one large and three small cypress cases.
In other words, this Chapel is the location of "the Holy of Holies", no different from
Solomon's temple in Jerusalem.  An architrave set on four  porphyry columns states,
"Non est in toto sanctior Orbe locus" (there is no holier place on earth).
-from Macart's book St. John Lateran


As you can see from the photo, there was a line of people waiting to climb.  I had no idea what I was in for!  This looked much easier than it was and I will admit to you all that I was not prepared for the spiritual significance.  This was extremely painful!  Every step made my body ache.  The closer I got to the top, the clearer the painting of  The Crucifixion became.  Good Friday took on new meaning for me.

By the time I reached the last step, I was a mess!  I was a crying, sweating, aching, shaking mess!  I don't think my knees will ever be the same again.  As I knelt during Mass these past two Sundays since returning from Rome, I was reminded of this experience and in awe yet again at the love that God has for us...for me.
The pain and suffering that I felt was just a fraction of what Our Lord experienced.  He could have stopped it.  He could have set Himself free.  He chose to suffer.


****On a side note, Blogger has apparently permanently lost my Beatification post.  At the advice of others, I checked my Google Reader and found the post there.  I've done a copy/paste to a word document so that I can repost it at some point....however...the copy and paste didn't work for the pictures.....sooooo, I'll have to upload them again.  For those of you that commented on the post.....Blogger apologizes...profusely.  In light of my experiences at the Holy Staircase, I'm inclined to FORGIVE them, but I must admit.....Blogger is really starting to get on my nerves....just sayin******
Lovingly created by Nancy at 12:00 AM

How wonderful, Nancy! I wish I had seen them when I was in Rome.

Hi Nancy, I had no idea that Rome had so many churches. Any idea what percentage are Catholic? Just curious if other denominations set up churchs to detract from the Vatican and St. Peter's Basilica. I can't imagine climbing all of those stairs but what a blessing to do so.

I spent a few days in Rome a few years ago. We saw some of the churches! I could not get enough of St Peter's though. I could have spent days there. I knew I could not handle the staircase. Amazing that you did that!